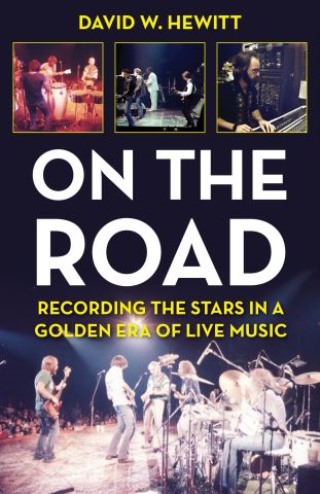 Recording the Stars in a Golden Era of Live Music

This book tells the story of a life spent on the road recording the rich diversity of music in America when it was a major part of our lives, not just digital background noise. For music fans, there was a golden era of live music, stretching from the 1960s through the 1980s, and even evolving into the 1990s, if you want to be generous.

In the pre-digital era, music fans spent a large part of their free time (and money) listening to their favorite artist’s recordings. It was an analog world so if they wanted to hear the music, they actually had to listen to the radio, buy the records, and go to the concerts. Popular artists had long performed live concerts in the major markets, but it took rock 'n' roll to make national touring a viable business.

Touring sound systems grew from scratch to keep up with larger and larger venues. Likewise, the ability to record those shows had to grow as well. The rudimentary collection of semi-professional gear grew into full-blown remote recording studios to keep up with the demand for live records, films, and broadcasts. The truly wonderful thing about the remote recording business was the author experienced so many different musical cultures. Where else could you go from recording a tour with the Rolling Stones to a TV special with Mohamed Ali at the Apollo Theater? How about the season opening of Carnegie Hall on PBS TV (with a different major orchestra every year) to Frank Zappa’s annual Halloween Show? Or maybe a Yoko Ono tour behind the 1980s Iron Curtain to the Eagles in modern Australia?

Then there are worldwide live broadcasts like the Academy Awards and the Grammy Awards to intimate jazz settings with Miles Davis or Wynton Marsalis. Compare the grandeur of the Metropolitan Opera to the irreverent comedy of Saturday Night Live.

On the Road contains the stories of recording all that music live in its natural habitat, the clubs, theaters, concert halls, and arenas. There were only a few companies that succeeded in the rough and tumble business of live recording. The author was one of the most successful live recording engineers and the constructor of remote recording studios during that era, with thousands of live shows to his credit.

David Hewitt has been a legendary name in the live recording industry since the1970s, having built and operated the most advanced remote studios of the era. Working for the New York Record Plant Studios and his own company Remote Recording Services, his clients have included everyone from Aretha to Zappa, Miles to MJQ, George Jones to Shania Twain, live broadcasts from the Oscars to the NY Metropolitan Opera, and film scores from Die Hard to Disney.

His awards include many gold and platinum records, Cinema Audio Society awards and Grammy winning records, not to mention Emmy-winning broadcasts.

His peers in the recording industry have awarded him 8 TEC Awards and membership in the TEC Hall of Fame.