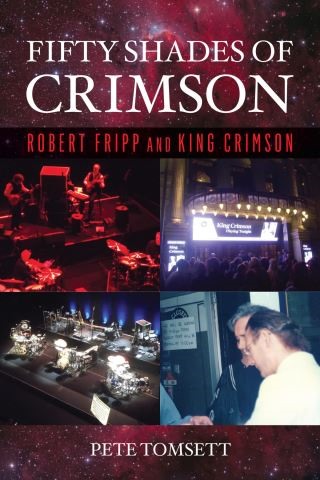 In 1969 five young Englishmen calling themselves King Crimson altered the course of rock music, and despite a revolving-door lineup, the band has continued to innovate and inspire for more than fifty years. Fifty Shades of Crimson tells the story of this legendary band and of the unique English guitarist Robert Fripp it revolves around. With a deep passion for the music, author Pete Tomsett celebrates the achievements of Fripp and the array of incredible talent that has passed through Crimson, while not shying away from the many behind-the-scenes difficulties.

Getting signed after supporting The Rolling Stones at Hyde Park, Crimson shot to fame with their debut album, In the Court of the Crimson King, becoming one of the most influential bands of that era and triggering the rise of prog rock. While going through countless personnel, including Greg Lake, Bill Bruford and John Wetton, rejecting Elton John and Bryan Ferry along the way, they have put out many highly acclaimed albums and to this day maintain a big international following.

In their early years Fripp's band reached the same commercial heights as the likes of David Bowie and Pink Floyd. However, as an intellectual who despised the practices of the music business, Fripp preferred innovation over chasing big sales. In 1974 he withdrew from mainstream music, becoming involved with the Fourth Way philosophy, but was eventually tempted back and reformed Crimson to much acclaim in the eighties. As well as also having collaborations with Brian Eno, Andy Summers and others, Fripp has created new forms of instrumental music, run his own idiosyncratic guitar courses and set up an ethical record company. Both genius and 'a special sort of awkward', Fripp has never been afraid to take his music where no one has gone before, and Crimson have been a powerful influence on everyone from Genesis and Yes to Roxy Music and Radiohead, creating a legacy that will live on for decades more!

Pete Tomsett is an author and musician who also dabbles in videos. An avid Fripp fan for over forty years, he was introduced to prog rock at an early age by his brother, developing a passion for imaginative music that goes beyond conventions and clichés. He lives in London.