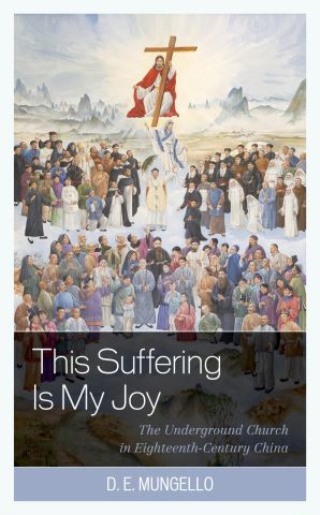 This Suffering Is My Joy

The Underground Church in Eighteenth-Century China

Tracing the little-known history of the first underground Catholic church in China, noted scholar D. E. Mungello illuminates the period between the imperial expulsion of foreign Christian missionaries in 1724 and their return with European colonialism in the 1800s. Few realize that this was the first time in which Chinese, rather than Europeans, came to control their own church as Chinese clergy and lay leaders maintained communities of clandestine Catholics.

Mungello follows the church in a time of persecution, focusing in particular on the role of Chinese clergy and lay leaders in maintaining communities of clandestine Catholics during the eighteenth century. He highlights the parallels between the 1724 and 1951 expulsions of missionaries from China, the first driven by a Chinese imperial system and the second by a revolutionary Communist government. The two periods also reflected foreign bias against the Chinese priests and laity and questions about their spiritual depth and constancy. However, Mungello shows that the historical record of incarcerated and interrogated Christians reveals a spiritually inspired resistance to government oppression and a willingness to suffer, often to the point of martyrdom.

D. E. Mungello is professor of history emeritus at Baylor University. His books include The Great Encounter of China and the West, 1500–1800, Drowning Girls in China: Female Infanticide since 1650, Western Queers in China: The Fight to the Land of Oz, and The Catholic Invasion of China.