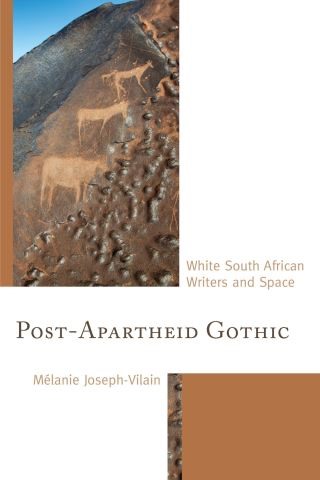 Post-Apartheid Gothic: White South African Writers and Space analyzes the representation of space in recent works by South African writers. By combining analytical tools borrowed from Gothic studies with geocritical and postcolonial approaches, Mélanie Joseph-Vilain assesses the literary mechanisms utilized by Damon Galgut, Henrietta Rose-Innes, Lauren Beukes, Justin Carwright, and Lynn Freed to negotiate the complexities of post-apartheid identities in their fiction. Joseph-Vilain argues that the literary representations of emblematic places, real or imagined (the home, the farm, the city or the “non-places” of dystopia), express and reveal anxieties linked to the sharing of space in post-apartheid South Africa. The text successively (re-)visits the places that have been shaping South African white writing since Olive Schreiner’s African Farm—in other words, its topoi, both in the etymological sense of “place” and in the literary sense of recurring themes or arguments. Joseph-Vilain argues that these Gothicized topoi have provided writers with tools to explore the deep anxieties generated by the redefinition of South African society as the Rainbow Nation. While focusing specifically on the South African avatars of the Gothic and their interaction with local forms and genres like the plaasroman, the text also discusses the impact of globalization on South African literary, cultural, social, and political identities.

Mélanie Joseph-Vilain is professor of postcolonial literatures and head of the research team “Individu et nation” for the TIL Research Center at the University of Burgundy in Dijon.