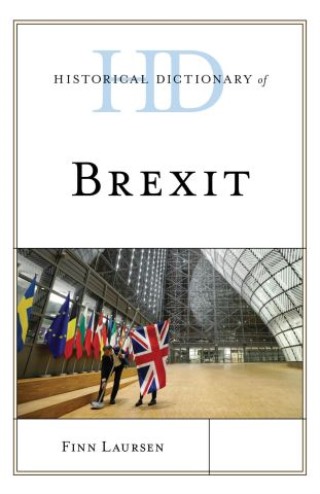 Brexit is the withdrawal of the United Kingdom from the European Union. The relationship between Great Britain and the European Union is a long and complicated one, the UK opted out of a membership in the EU (or then European Economic Community) back in 1950, set up a rival group known as the European Free Trade Association (EFTA) in 1961, applied for EU membership in 1971 where it became an "awkward partner" for decades only to withdraw at midnight on 31 January 2020 at which time it became a fully sovereign country again

Historical Dictionary of Brexit contains a chronology, an introduction, and an extensive bibliography. The dictionary section has more than 300 cross-referenced entries terms, persons and events that shaped Brexit. This book is an excellent resource for students, researchers, and anyone wanting to know more about Brexit.

Finn Laursen holds a Jean Monnet Chair ad personam since 2007 and is an honorary professor at the University of Southern Denmark, Odense. He has published extensively and has authored and edited or co-edited about 25 books and published about 100 journal articles or book chapters. Since January 2015 Finn Laursen has also been a Senior Editor of Oxford Research Encyclopedia of Politics (OREP), and from March 2017 he has been editor-in-chief of the Oxford Encyclopedia of European Union Politics, which is due to be published in multi-volume print edition in early 2021.