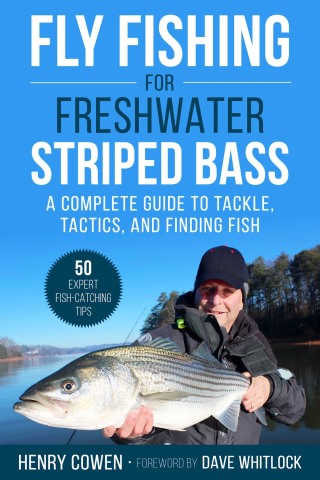 A Complete Guide to Tackle, Tactics, and Finding Fish

Here fishing guide and fly designer Henry Cowen shares decades of hard-earned knowledge of stripers for the first time. Learn about the species, its food, and where and how to find them, so you can land far more and bigger stripers.

Knowing where and how to find stripers is key, and Cowen offers proven techniques for locating fish in both reservoirs and rivers, including water temperature, seasonal patterns, weather patterns, locating the bait, water clarity, and wildlife and how it can help anglers. The popularity of fishing for striped bass in freshwater is growing quickly, especially as global warming allows the fish to live in waters that used to be too cold. This is the first major book on the subject, one that is sure to be part of a big trend among fly fishers.

Cowen also takes a close look at freshwater striped bass, explaining how natural and stocked fisheries are managed as well as the difference between the various species. Along with help choosing equipment and some notes on wading tactics, anglers will have everything they need to improve their fishing techniques or make a start on this popular all-American outdoor sport.

Henry Cowen: Henry Cowen grew up in Brooklyn, New York, where he learned to fish for striped bass at an early age. He is an Umpqua Feather Merchants fly designer as well as a writer for many nationally renowned fly-fishing magazines, including American Angler, Fly Tyer, and The Angler Magazine. He started guiding for freshwater stripers around 2000 and has been at it ever since. Henry and his wife, Tina, reside in Atlanta, Georgia, with their two dogs, Starlet and Sweet Pea.

Dave Whitlock was born in Oklahoma, where he now lives, and is the author or illustrator of many fine angling books, including Dave Whitlock’s Guide to Aquatic Trout Foods, the L.L. Bean Fly-Fishing Handbook, and the L.L. Bean Fly Fishing for Bass Handbook. Dave lives with his wife, Emily, but the Ozark Mountains in Welling, Oklahoma.