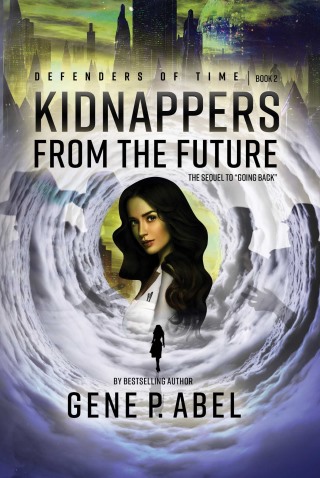 Kidnappers from the Future

The time travel adventure continues in the page-turning second novel in the bestselling Defenders of Time series.

With the recent expansion of the time travel program to include Dr. Sam Weiss’s niece, Samantha, exciting breakthroughs are on the horizon. Just days before she is set to officially join the team, Samantha, her uncle, and Special Agent Hessman encounter a group of Russian terrorists who vanish into thin air and leave behind a strange type of electrified bullet. Despite all security precautions, the terrorists once again appear in the middle of the base and successfully kidnap Samantha. Her location is completely unknown.

The team must race uncover why these Russians, who appear to have come from the future, have traveled through time to take Samantha. Their mission is immediately clear: rescue Samantha and find out why she was kidnapped in the first place. The team will be forced to overcome their outdated technology, and Special Agent Hessman’s developing feelings for Samantha, to save her and unravel this mystery from the future.

Gene P. Abel: Gene P. Abel brings a successful and diverse educational and professional background to his writing. Mr. Abel's formal education includes earning a bachelor of science degree in finance and a master of business administration. His thirty years as a highly successful business executive in both the private and public sectors overlay his thirty years' service as a commissioned officer in the United States Army and Army Reserve. After graduating as a Distinguished Military Graduate from Penn State, Mr. Abel spent five years on active duty as a Regular Army officer and twenty-five years as an Army Reserve officer, with such diverse assignments as nuclear weapons officer and finance officer. He completed the Army War College in 1985 and was awarded the Meritorious Service Medal on two occasions. Mr. Abel was nominated for brigadier general and retired from the US Army as a colonel.