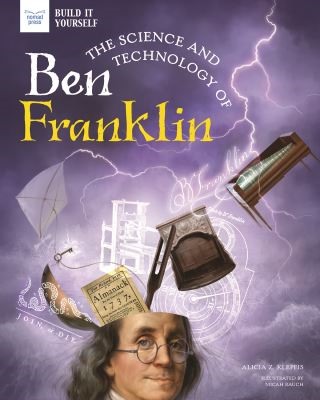 The Science and Technology of Ben Franklin

This STEM-based science biography explores Benjamin Franklin’s lifetime of boundless curiosity and encourages kids to imagine what they can do as inventors and scientists through hands-on projects!

Inventor. Scientist. Diplomat. Printer. Benjamin Franklin was a very curious person, which led to lots of different roles during his lifetime.

In The Science and Technology of Ben Franklin, readers ages 9 through 12 explore the life of one of colonial America’s most fascinating citizens. They discover what it might have been like to be a young person in the early eighteenth century, when work and entertainment looked much different from today. Franklin’s frequent forays into science and technology drive the story forward as kids grow more and more eager to see how Franklin solves the problems he’s confronted with. Even when Franklin’s experiments failed or his inventions flopped, he continued to take risks in order to push the limits of people’s knowledge of the world back then. His dedication to invention and experimentation gave the world new insight into electricity, heat, and much more.

Alicia Z. Klepeis is the author of more than 70 nonfiction and fiction books. Her titles include Gutsy Girls Go For Science: Astronauts; The Renaissance Inventors; The Renaissance Explorers; and Explore Makerspace! With 25 Great Projects. She has also written more than 100 articles in magazines such as National Geographic Kids and FACES. She lives with her family in Hamilton, New York.

Micah Rauch is a freelance graphic designer and illustrator from the beautiful state of Montana. He received a BFA in graphic design from Montana State University in Bozeman, Montana, and is the illustrator of Crazy Contraptions; Build Rube Goldberg Machines that Swoop, Spin, Stack, and Swivel; Fairground Physics: Motion, Momentum, and Magnets and Kitchen Chemistry: Cool Crystals, Rockin’ Reactions, and Magical Mixtures.