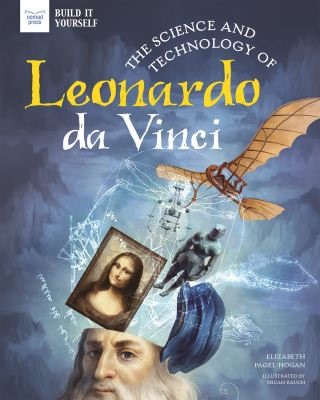 The Science and Technology of Leonardo da Vinci

A science biography that examines the life and work of Leonardo da Vinci and offers kids the opportunity to make their own designs and inventions with hands-on activities!

Leonardo da Vinci is famous for the Mona Lisa and other works of art. His other claim to fame? Being an inventor!

During the Renaissance, inventors and other creative thinkers designed and constructed many new things. It was a time of discovery, wonder, and exploration. And one of the people on the forefront of that awakening was Leonardo da Vinci. In The Science and Technology of Leonardo da Vinci, readers ages 9 through 12 explore the life of one of the world’s most amazing minds. They discover what it might have been like to live in the fourteenth century, when work, entertainment, medicine, travel, and food were very different. They ponder the same kinds of questions that drove Leonardo to tinker and experiment endlessly, even while creating artwork that influenced entire generations who came after him. What is the inside of the body like? How might humans fly? How can geometry be used to design stronger buildings?

His dedication to invention, experimentation, and art, along with his insatiable curiosity, gave the world new insight into anatomy, botany, engineering, and much more. Kids gain these same insights through hands-on STEM activities, essential questions, text-to-world connections, and links to online resources, including primary sources, that encourage readers to take a closer look at the world of the Renaissance. The Science and Technology of Leonardo da Vinci is part of a set of three Build It Science Biographies that capture the curiosity of three science revolutionaries who were able to glimpse beyond the limits of human experience and make discoveries that continue to resonate today. Other titles in this set include The Science and Technology of Ben Franklin and The Science and Technology of Marie Curie.

Elizabeth Pagel-Hogan is an author and science educator. She is the author of several science fiction and non-fiction pieces for magazines, including Highlights for Children and Muse. For many years, she taught science and technology as an educator for Carnegie Science Center. She lives in Pittsburgh, Pennsylvania.

Micah Rauch is a freelance graphic designer and illustrator from the beautiful state of Montana. He received a BFA in graphic design from Montana State University in Bozeman, Montana, and is the illustrator of Crazy Contraptions; Build Rube Goldberg Machines that Swoop, Spin, Stack, and Swivel; Fairground Physics: Motion, Momentum, and Magnets and Kitchen Chemistry: Cool Crystals, Rockin’ Reactions, and Magical Mixtures.