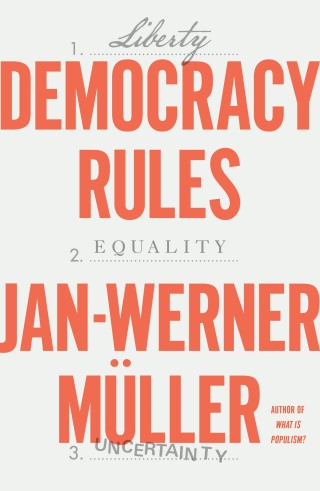 A much-anticipated guide to saving democracy, from one of our most essential political thinkers.

Everyone knows that democracy is in trouble, but do we know what democracy actually is? Jan-Werner Müller, author of the widely translated and acclaimed What Is Populism?, takes us back to basics in Democracy Rules. In this short, elegant volume, he explains how democracy is founded not just on liberty and equality, but also on uncertainty. The latter will sound unattractive at a time when the pandemic has created unbearable uncertainty for so many. But it is crucial for ensuring democracy’s dynamic and creative character, which remains one of its signal advantages over authoritarian alternatives that seek to render politics (and individual citizens) completely predictable.

Müller shows that we need to re-invigorate the intermediary institutions that have been deemed essential for democracy’s success ever since the nineteenth century: political parties and free media. Contrary to conventional wisdom, these are not spent forces in a supposed age of post-party populist leadership and post-truth. Müller suggests concretely how democracy’s critical infrastructure of intermediary institutions could be renovated, re-empowering citizens while also preserving a place for professionals such as journalists and judges. These institutions are also indispensable for negotiating a democratic social contract that reverses the secession of plutocrats and the poorest from a common political world.

Jan-Werner Müller: Jan-Werner Müller is Roger Williams Straus Professor of Social Sciences at Princeton University. He has been a fellow at All Souls College, Oxford and has held many visiting professorships. His public affairs commentary has appeared in The New York Times, The Guardian, Foreign Affairs, The New York Review of Books, and the London Review of Books, among other publications. His book Fear and Freedom won the Bavarian Book Prize in 2019.