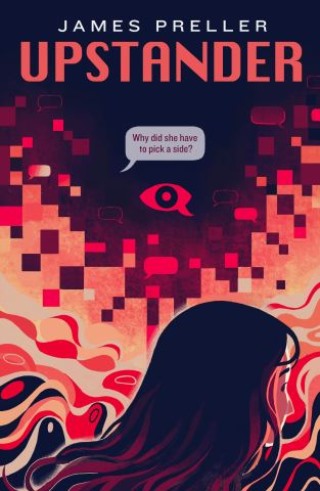 Girl bullies, internet bullying, and substance use are themes in this James Preller middle grade standalone companion to Bystander

Mary O’Malley is tired of keeping secrets. Secrets like her older brother, Jonny’s, drug use. Starting seventh grade is tough enough without the upheaval her brother is bringing to their family.

It seems the only person who might understand is Griffen Connolly, whose older sister runs with Jonny in the wrong crowd. Mary thought Griff was too cool, too popular for her. But now he wants to hang out with her, and listen.

When two girls Mary thought were her friends decide to slam another girl online, Mary tries to look the other way. Then the girls turn on Mary, and suddenly, she doesn’t have a safety zone. Her brother is out of control, her family’s energies are all spent on him. There is only one person she can turn to. But can she trust Griff? Or is he one of the bullies?

James Preller: James Preller is the author of the popular Jigsaw Jones mystery books, which have sold more than 10 million copies since 1998. He is also the author of Bystander, named a 2009 Junior Library Guild Selection, Six Innings, an ALA Notable Book, and Mighty Casey, his own twist on the classic poem, “Casey at the Bat.” In addition to writing full-time, Preller plays in a men’s hardball league and coaches Little League. He compares coaching kids to “trying to hold the attention of a herd of earthworms.” He lives in Delmar, New York with his wife, three children, cats and dog.