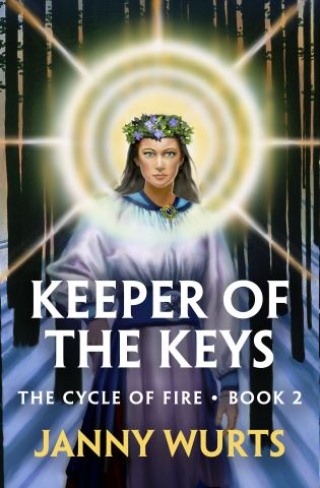 Keeper of the Keys

Second in the SF/fantasy trilogy by the author of Stormwarden: “Reminiscent of Andre Norton’s Witch World . . . Wurts writes with creativity and passion.” —Fantasy Literature

With Kiethland restored to precarious peace, Taen Dreamweaver and Jaric, the sole heir to Ivain Firelord, have thwarted the demons’ initial bid to exterminate humanity. But the threat remains in the precarious charge of the Stormfalcon’s feather and the Keys to Elrinfaer that imprison the ravenous Mharg. Both must be restored to Anskiere, still trapped in his prison of ice. His release will depend upon Jaric’s mastery of the Cycle of Fire, the sorcerous challenge that drove his father to madness.

Both Taen and Jaric must prevail against Taen’s brother, Emien, fallen to demons and overridden by alien desires that ravage his spirit. With Emien the perfect pawn shaped for Kiethland’s downfall, his overlords feed his insatiable hatred with power for one purpose only: to hunt down and slay the Firelord’s heir and the sister whose gentler talent defends him.

“With each new book it becomes more and more obvious how important Janny Wurts is to contemporary fantasy.” —Guy Gavriel Kay

“Janny Wurts brings an artist’s eye for detail and mood to the field of fantasy writing.” —Robert Lynn Asprin

Janny Wurts: Janny Wurts is an author and artist who has published nineteen novels, a collection of short fiction nominated for the British Fantasy Award, and numerous science fiction and fantasy short stories. Her books include the Wars of Light and Shadow series; standalone novels To Ride Hell’s Chasm, The Master of Whitestorm, and Sorcerer’s Legacy; the Cycle of Fire trilogy; and the Empire Trilogy written in collaboration with Raymond E. Feist.

Wurts has a painting in the permanent collection of the Delaware Art Museum. Her other artwork has appeared in such venues as NASA’s twenty-fifth anniversary exhibit, the Canton Museum of Art, and the Hayden Planetarium in New York. She has received two Chesley Awards for her work.

​Wurts lives in Florida with three cats and a retrained racehorse, and rides with the mounted team for Peace River K9 Search and Rescue, Inc. For more information, visit www.paravia.com/JannyWurts.