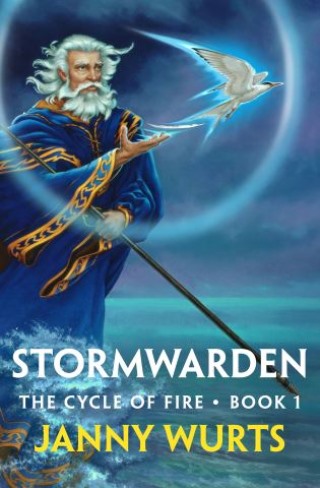 First in the classic Cycle of Fire trilogy from the acclaimed fantasy author: “An outstanding piece of work in every way.” —Andre Norton, New York Times–bestselling author

Caught in an evil plot by a king’s emissary keen to seize power, Anskiere—master of wind, wave, and weather—submits to a false accusation of mass murder in order to spare the innocent village that sheltered him.

When his desperate act of resistance traps him in a prison of his own making, Anskiere must rely on the undying loyalty of a young girl, her older brother’s obsessive quest for vengeance, and the weakling descendant of his greatest betrayer, once master of fire and earth, to thwart the ruinous ambition of his enemies. Together, the three will face a critical challenge: the rescue of Anskiere—and the unbinding of demons bent on humanity’s destruction.

“It ought to be illegal for one person to have this much talent.” —Stephen R. Donaldson

Janny Wurts: Janny Wurts is an author and artist who has published nineteen novels, a collection of short fiction nominated for the British Fantasy Award, and numerous science fiction and fantasy short stories. Her books include the Wars of Light and Shadow series; standalone novels To Ride Hell’s Chasm, The Master of Whitestorm, and Sorcerer’s Legacy; the Cycle of Fire trilogy; and the Empire Trilogy written in collaboration with Raymond E. Feist.

Wurts has a painting in the permanent collection of the Delaware Art Museum. Her other artwork has appeared in such venues as NASA’s twenty-fifth anniversary exhibit, the Canton Museum of Art, and the Hayden Planetarium in New York. She has received two Chesley Awards for her work.

​Wurts lives in Florida with three cats and a retrained racehorse, and rides with the mounted team for Peace River K9 Search and Rescue, Inc. For more information, visit www.paravia.com/JannyWurts.