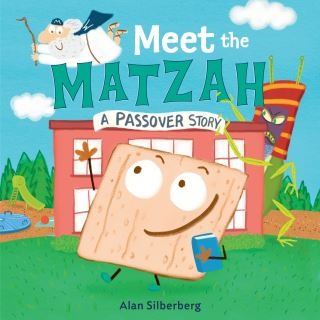 From the creator of Meet the Latkes comes the zaniest retelling of the Passover story starring an earnest matzah and his bready friends!

What makes this Passover different from all other Passovers?

Meet Alfie Koman. He's a matzah who really likes to hide. But Alfie also has a great story to tell his class of how the Hebrews fled Egypt to freedom. Too bad Loaf, the school sourdough bully, turns Alfie's Passover story upside-down. A pharaoh who is a giant cockroach? Moses as a mighty superhero? And Ten Plagues that include "No Wi-fi" and "Chocolate-turned-to-broccoli"?

Looks like it's up to Alfie and his best friend Challa Looyah to get the Passover story right. Alfie just has to come out of hiding first....

A follow-up to the hysterical Meet The Latkes, this Passover book is another mis-told holiday treat.

Alan Silberberg: Alan Silberberg (www.silberbooks.com) is an award-winning author, cartoonist and children's TV creator who has worked with Nickelodeon and Disney. He's the author and illustrator of three previous middle grade novels including Milo: Sticky Notes & Brain Freeze, which won the Sid Fleishman Humor Award and is currently in development to become an animated TV series. Meet the Latkes was Alan's debut picture book, followed by Meet the Matzah.