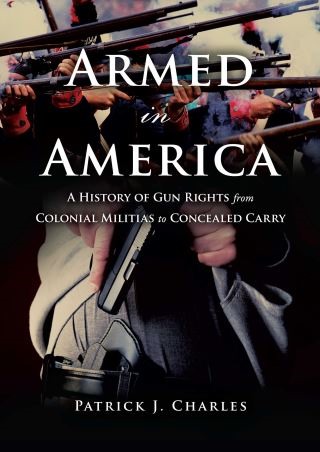 A History of Gun Rights from Colonial Militias to Concealed Carry

NOW WITH A NEW PREFACE THAT BRINGS THE FRAUGHT GUN-RIGHTS CONTROVERSY UP TO DATEThis accessible legal history describes the way in which the Second Amendment was interpreted throughout most of American history and shows that today's gun-rights advocates have drastically departed from the long-held interpretation of the right to bear arms.This illuminating study traces the transformation of the right to arms from its inception in English and colonial American law to today's impassioned gun-control debate. As historian and legal scholar Patrick J. Charles shows, what the right to arms means to Americans, as well as what it legally protects, has changed drastically since its first appearance in the 1689 Declaration of Rights.Armed in America explores how and why the right to arms transformed at different points in history. The right was initially meant to serve as a parliamentary right of resistance, yet by the ratification of the Second Amendment in 1791 the right had become indispensably intertwined with civic republicanism. As the United States progressed into the 19th century the right continued to change--this time away from civic republicanism and towards the individual-right understanding that is known today, albeit with the important caveat that the right could be severely restricted by the government's police power. Throughout the 20th century this understanding of the right remained the predominant view. But working behind the scenes was the beginnings of the gun-rights movement--a movement that was started in the early 20th century through the collective efforts of sporting magazine editors and was eventually commandeered by the National Rifle Association to become the gun-rights movement known today.Now with a new preface that brings the fraught gun-rights controversy up to date, this book is an invaluable resource for readers looking to sort through the shrill rhetoric surrounding the current gun debate and arrive at an informed understanding of the legal and historical development of the right to arms.