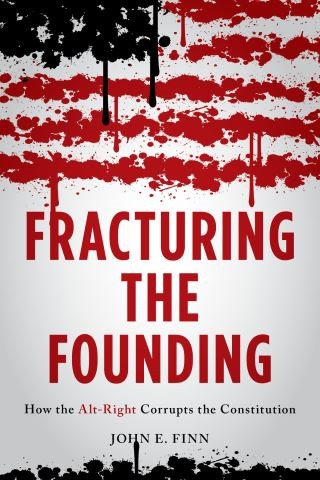 How the Alt-Right Corrupts the Constitution

Many in the radical right, including the Tea Party, the militia movement, the Alt-right, Christian nationalists, the Oath Keepers, neo-Nazis, and a host of others, brand themselves as constitutional patriots. In Fracturing the Founding: How the Alt-Right Corrupts the Constitution, John E. Finn, one of America’s leading constitutional scholars, argues that these professions of constitutional devotion serve an important function in mainstreaming the radical right’s ideological and policy agenda: to camouflage its racism, bigotry, and sexism to appeal to a broader audience. The constitution the extreme right holds as its faith is an odd admixture of the forgotten, the rejected, the racist, and the bizarre. Finn illuminates the central precepts of the Alt-constitution and shows how and where it differs from the (true) American Constitution. The differences are disturbing. The Alt-constitution emphasizes absolute rights and unassailable liberties (especially for freedom of speech and guns, no matter the public interest), states’ rights and a corresponding suspicion of the federal government, racial classifications recognized and legitimated by law, and privilege for white Christians. Finn’s book will appeal to all readers interested in contemporary American politics, the contemporary radical right, the Founding and the history of America’s constitution.