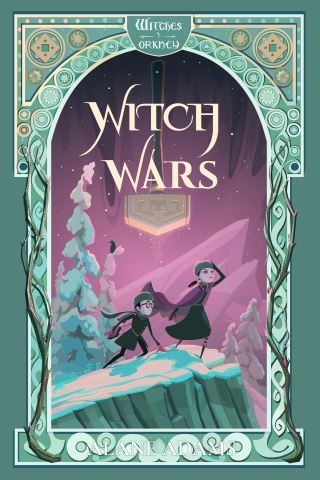 Abigail’s second year at the Tarkana Academy has been an all-out disaster. She’s just unwittingly helped Vertulious, an ancient he-witch and powerful alchemist, destroy Odin’s Stone and restore his powers, and now all of Orkney is caught up in the threat of war as the witches prepare to destroy the helpless Orkadians. Determined to set things right, Abigail and Hugo set off for Jotunheim, the land of the giants, to find a weapon to restore the balance. All they have to do is track down the God of Thunder and convince Thor to turn his hammer over to them. When their former-friend-now-foe Robert Barconian arrives with a band of dwarves, intent on stopping them, Abigail and friends must unite to prevent a war that will destroy them all. But has Abigail made the biggest mistake of all by trusting in the wrong ally?

Alane Adams: Alane Adams is an author, professor, and literacy advocate. She is the author of the Legends of Orkney fantasy mythology series for tweens and The Coal Thief, The Egg Thief, The Santa Thief, and The Circus Thief, picture books for early-grade readers. She lives in Southern California.