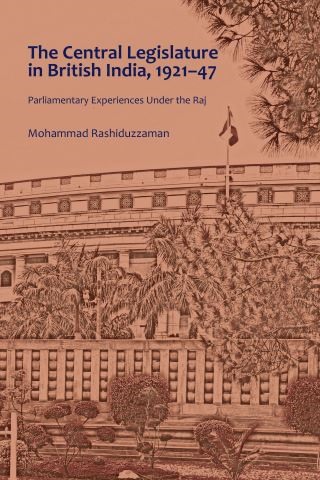 The Central Legislature in British India, 192147

Parliamentary Experiences Under the Raj

The Central Legislature in British India 1921–47: Parliamentary Experiences Under the Raj is an exceptional exposé of Colonial India’s highest legislative body. With its wealth of materials and in-depth description of the former Indian Legislature’s actual working, its political milieu and its institutional development, this book belongs to the larger genre of the British Indian narratives on the constitutional encounters between the rulers and the ruled. This book touches on a critical range of areas essential to our understanding of the British Raj in India. This book adds a significant depth to a neglected quarter of historical knowledge—the chronicle of parliamentary experiences and the representative institution-building in Colonial India. Undeniably, the Central Legislature was the only acknowledged all-India forum where the Indian legislators and the Imperial Executive, time and again, ran into each other. Yet, even at the lowest ebb of the Indian lawmakers’ disillusionment, the two flanks, intermittently, showed a modicum of mutual respect: though limited, the two sides indirectly shared power, went through the motion and contributed to policy-making typically over a strip of non-controversial subjects.

Mohammad Rashiduzzaman is a retired academic and Professor Emeritus in Political Science at Rowan University in Glassboro, New Jersey, USA. He completed his Ph.D. at the University of Durham, England in 1964 as a British Commonwealth Scholar. His Ph.D. thesis on the British Indian central legislature (1921–47) was the co-winner of the British Hansard Society’s Lord Campion Prize in 1965 for the best dissertation on the understanding of representative institutions. He taught at the University of Dhaka, now Bangladesh, before going to Columbia University in New York for his postdoctoral research. Later, he taught at Rowan University. He has written several publications on British India, Pakistan, and Bangladesh.