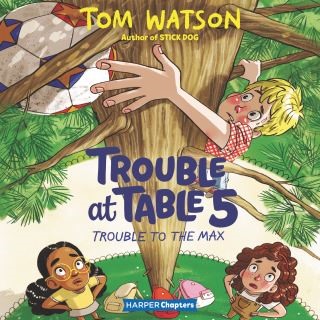 Trouble at Table 5 #5: Trouble to the Max

From the author of Stick Dog comes the fifth book in a highly illustrated early chapter book series about three best friends whose plans, missions, and schemes are sure to shake up their school.

Time out! Simon got Max Brutus’s prized World Cup soccer ball stuck in the tallest tree in Picasso Park! Now he’s in more trouble than a tater tot in ketchup. Can his friends at Table 5 help him get the ball before the big game? Or has Simon’s luck maxed out?

HarperChapters build confident readers one chapter at a time! With short, fast-paced books, art on every page, and milestone markers at the end of every chapter, they're the perfect next step for fans of I Can Read!