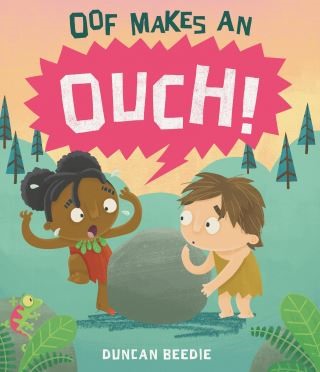 Oof and Pib come from an ancient tribe. They know hardly any words - in fact they only know how to say their own names - but it doesn't stop them from being the best of friends and doing everything together . . . Until Oof starts inventing all sorts of NEW words, and Pib feels so jealous that he does something to threaten their friendship forever.

Can Pib come up with a word of his own to make things right again?

A funny and poignant tale about friendship, forgiveness, and the discovery of new words . . . including one that can be the hardest of all to say . . .

Duncan Beedie: Duncan Beedie is an author and illustrator with over 15 years' experience working in children's media. He began his career in children's TV as an animator before branching into design and animation for websites, games and educational apps. The Moth Who Went to the Moon is Duncan's fourth book for Templar, following on from The Bear Who Stared, The Lumberjack's Beard and The Last Chip. The Bear Who Stared was shortlisted for the Waterstones Children's Book Prize, 2017. Duncan lives in Bristol with his wife, daughter and tirelessly playful Springer Spaniel, Ivor.