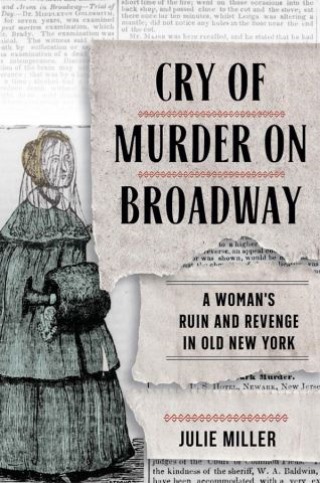 Cry of Murder on Broadway

A Woman's Ruin and Revenge in Old New York

In Cry of Murder on Broadway, Julie Miller shows how a woman's desperate attempt at murder came to momentarily embody the anger and anxiety felt by many people at a time of economic and social upheaval and expanding expectations for equal rights.

On the evening of November 1, 1843, a young household servant named Amelia Norman attacked Henry Ballard, a prosperous merchant, on the steps of the new and luxurious Astor House Hotel. Agitated and distraught, Norman had followed Ballard down Broadway before confronting him at the door to the hotel. Taking out a folding knife, she stabbed him, just missing his heart.

Ballard survived the attack, and the trial that followed created a sensation. Newspapers in New York and beyond followed the case eagerly, and crowds filled the courtroom every day. The prominent author and abolitionist Lydia Maria Child championed Norman and later included her story in her fiction and her writing on women's rights.

The would-be murderer also attracted the support of politicians, journalists, and legal and moral reformers who saw her story as a vehicle to change the law as it related to "seduction" and to advocate for the rights of workers. Cry of Murder on Broadway describes how New Yorkers, besotted with the drama of the courtroom and the lurid stories of the penny press, followed the trial for entertainment. Throughout all this, Norman gained the sympathy of New Yorkers, in particular the jury, which acquitted her in less than ten minutes.

Miller deftly weaves together Norman's story to show how, in one violent moment, she expressed all the anger that the women of the emerging movement for women's rights would soon express in words.

Julie Miller is the author of Abandoned: Foundlings in Nineteenth-Century New York City. She taught in the history department at Hunter College, City University of New York, before moving to Washington, DC.