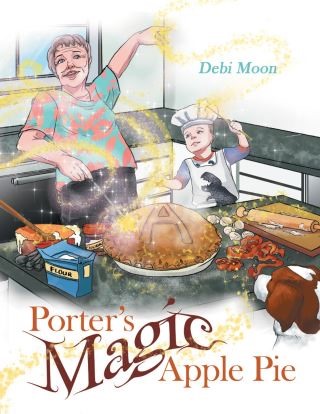 Three-year-old Porter discovers the magic that can be found in his grandmother’s kitchen when together they make an apple pie from scratch.
Little Porter’s senses are on high alert as he suddenly grows taller to help his grandma at her kitchen counter while learning the secrets that create the heavenly aroma and taste of a baked apple pie. Their special bonding time relies on cooperation, trust, and his grandma’s special brand of magic. As Porter and his grandma wave their magic wands, they pop into a personal abracadabra moment where flour mingles with apples and cinnamon and creates a pie made not just from kitchen ingredients, but also unconditional love.
In this heartwarming tale for children, a boy learns from his grandmother the art of using a special blend of ingredients to make a delicious homemade apple pie.

Debi Moon resides in Linden, Alberta Canada, is a mother of three, grandmother of four, and proud dog owner of champion Brittany Spaniel, Luna. As a journalist with over twenty-five years of experience, Debi’s writing switched tracks with the discovery of breast cancer, moving her in a new direction. Debi credits the birth of her first grandchild, Porter with keeping her spirits lifted during this difficult season of life and for being her personal muse in the creation of a series of children’s books beginning with ‘Porter Flies Up, Up and Away’. Within ‘Porter’s Magic Apple Pie’, Debi has included bandaid character drawings of her own creation. A third book is in the works where Porter visits Grandma in the hospital. At this point, Porter is four and half years old and he continues to inspire her.