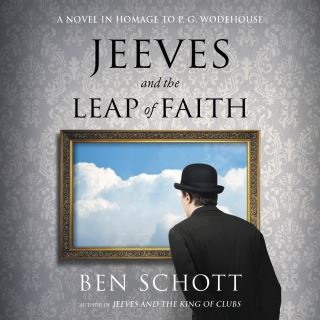 Jeeves and the Leap of Faith

A Novel in Homage to P. G. Wodehouse

Jeeves and Wooster return in a new espionage caper full of japes, high jinks, and jiggery-pokery in a series that is “impossible to read without grinning idiotically” (Evening Standard).

The Drones club’s in peril. Gussie’s in love. Spode’s on the war path. Oh, and His Majesty’s Government needs a favor . . .

I say! It’s a good thing Bertie’s back, what?

In his eagerly anticipated sequel to Jeeves and the King of Clubs, Ben Schott leads Jeeves and Wooster on another elegantly uproarious escapade.

From the mean streets of Mayfair to the scheming spires of Cambridge, we encounter a joyous cast of characters: chiseling painters and criminal bookies, eccentric philosophers and dodgy clairvoyants, appalling poets and pocket dictators, vexatious aunts and their vicious hounds.

But that’s not all:
Who is ICEBERG, and why is he covered in chalk?
Why is Jeeves reading Winnie-the-Pooh?
What is seven across and eighty-five down?
How do you play Russian Roulette at The Savoy?

These questions, and more, are answered in Jeeves and the Leap of Faith — an homage to P.G. Wodehouse, authorized by his estate, and essential reading for fans of The Master.

Ben Schott: Ben Schott is the New York Times and internationally bestselling author of Schott's Miscellany and the Schott's Almanac series. His first novel in homage to P.G. Wodehouse was Jeeves and the King of Clubs. A graduate of Cambridge University, he enjoyed a career as a photographer before becoming a writer. He is a regular columnist for Bon Appetit, Inc., Playboy, and the New York Times, and a frequent contributor to many other outlets, including The Guardian, Vanity Fair, the Paris Review, and more. He lives in New York City and London.