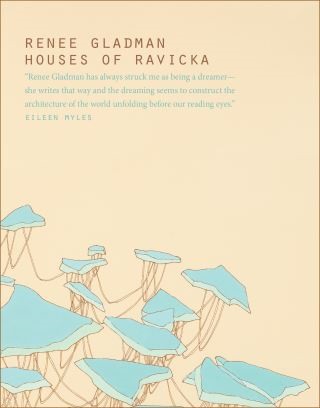 Since 2010 writer and artist Renee Gladman has placed fantastic and philosophical stories in the invented city-state of Ravicka, a Ruritanian everyplace with its own gestural language, poetic architecture, and inexplicable physics. As Ravicka has grown, so has Gladman's project, spilling out from her fiction--Event Factory, The Ravickians, and Ana Patova Crosses a Bridge--into her nonfiction (Calamities) and even visual art (Prose Architectures).

The result is a project unlike any other in American letters today, a fictional world that spans not only multiple books but different genres, even different art forms.

In Houses of Ravicka, the city's comptroller, author of Regulating the Book of Regulations, seems to have lost a house. It is not where it's supposed to be, though an invisible house on the far side of town, which corresponds to the missing house, remains appropriately invisible. Inside the invisible house, a nameless Ravickian considers how she came to the life she is living, and investigates the deep history of Ravicka--that mysterious city-country born of Renee Gladman's philosophical, funny, audacious, extraordinary imagination.