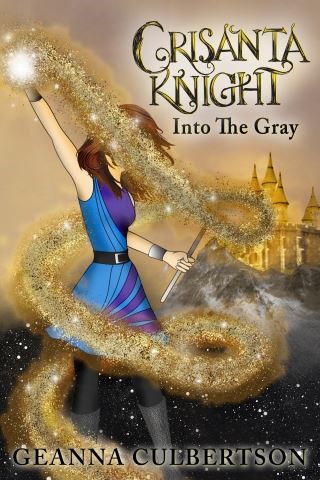 Crisanta Knight: Into the Gray

Maybe the gray was not where people went to get lost. Maybe it was the perfect place to be reborn. For in that gray was the potential to be anything, to become anyone.

Returning to protagonist school had confronted me with a mixed bag of change. Some things were good. I was a star athlete on my Twenty-Three Skidd team, my friends and I were closer than ever, I'd made amends with my traditionalist headmistress, and the surprisingly kind grandson of King Midas was doing his best to win my affection.

Other changes, however, were not so sweet. The greater realm now knew about my Pure Magic, and an upcoming trial by the realm higher-ups and Fairy Godmothers would decide my fate. My former princess archenemy was under a sleeping curse, which meant we couldn’t access the vital memories of a dead Fairy Godmother stored in her brain. The commons rebellion in our realm was only growing in strength. And I . . . Well, I'd taken my first life. The antagonist queen's careful planning paired with my hard-to-control powers of life had caused me to snap and kill someone. He'd been a villain, yes, but that didn't placate my morality. Especially given the ongoing internal war I struggled with over my abilities and their potential.

As I fought to be a strong hero, princess, and more importantly person, I was flogged by the many questions posed by enemies, friends, and my own conscience about how I was changing—and what I was changing into.

Would my magic inevitably corrupt me like the antagonists wanted and our realm's higher-ups feared? My personal fate aside, would my friends and I be able to stop the antagonists from taking over our realm? And finally, was I more afraid of not being powerful enough to stop them, or being even more powerful than anybody anticipated?

Geanna Culbertson: Geanna Culbertson is the award-winning author of The Crisanta Knight Series. The series follows the kids and siblings of fairytale characters, all of whom live in a magical world called "Book," where citizens train to be the next generation of main characters in stories. The majority of this coming-of-age series is told from the empowering, sassy perspective of Cinderella's daughter---Crisanta Knight.

Though loaded with exciting, magical elements and action-adventure, the core of this series is not the fantastic, but the human. Geanna set out to write a story that readers of all ages (8-80 as she says) can connect with and thus learn from and grow with. This highly character and voice driven story focuses on personal development and strong relationships, and deals with many themes such as: change, the power of choices, friendship, trust, potential, self-acceptance, and taking fate into your own hands. It is a YA and Middle Grade friendly series that will make you smile, and take you on an emotional ride of hilarity, introspection, danger, drama, and deliciousness.

Culbertson is a proud alumna of the University of Southern California where she earned her B.A. in Public Relations and triple minor degrees in Marketing, Cinematic Arts, and Critical Approaches to Leadership. She is a part of only 1.3% of her graduating class to earn the double distinction of Renaissance Scholar and Discovery Scholar. Her Discovery Scholar thesis "Beauty & the Badass: Origins of the Hero-Princess Archetype" earned her acclaim in the School of Cinematic Arts and helped her fuel her female protagonist writing passions.

Geanna is excited about continuing to expand her rich magical, and morally-driven content with the Crisanta Knight world, and other series and standalone books on the way!