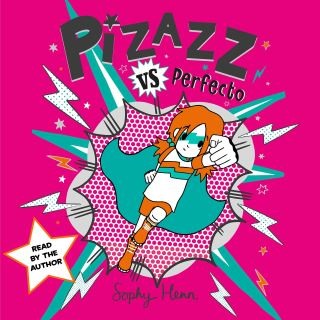 The third book in a SUPER (like, actually, with powers and stuff) new series for readers aged 7+ – ?from the amazingly talented illustrator and author Sophy Henn! Read by Sophy Henn herself, this is the perfect read for fans of Dork Diaries, Tom Gates, Amelia Fang, Wimpy Kid and Dog Man.

“A SPECTACULAR superhero story that fizzes with fun on every page!” – Liz Pichon, author of the bestselling TOM GATES series.

HELLO! My name is PIZAZZ and I’m a superhero . . . You probably think that’s really AWESOME, and while it can be, it’s also REEEEEEEAAALLLLY annoying.

Even though I’m saving the world ALL THE TIME, there are still LOADS of bad guys about.

Like super baddie PERFECTO! She’s younger than me, and just . . . well, PERFECT! But I have a plan. Maybe I just need to be perfect too – even moreperfect than Perfecto. Easy-peasy, right?!

Hilariously narrated by reluctant superhero Pizazz, this is the third book in the laugh-out-loud PIZAZZ series.

Sophy Henn: Sophy Henn is an award-winning picture book author and illustrator with a master’s in illustration from the University of Brighton. She is the creator of the much-loved Bad Nana series, the Pom Pom series, the Ted board book series, and the nonfiction titles Lifesize and Lifesize Dinosaurs, among others. Her debut picture book Where Bear? was nominated for the Kate Greenaway Medal and shortlisted for the Waterstones Children’s Book Prize. Sophy was the World Book Day Illustrator in 2015 and 2016.