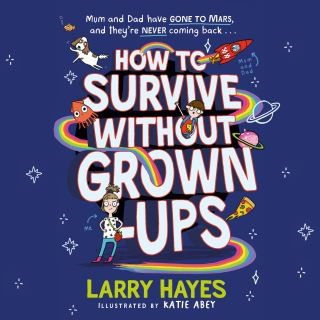 How to Survive Without Grown-Ups

Get set for the new hilarious out-of-this-world adventure series for listeners aged 8+ – this is the perfect new series for fans of Tom Gates, David Solomons and Star Wars!

But this isn’t one of Dad’s weird jokes; it’s REAL. It’s up to ten-year-old Eliza and her genius little brother, Johnnie, to find out what’s going on, and launch a rescue . . .

Can they handle vampire squids, a suspicious villain, a secret island full of traps and a trip into space? And – more importantly – will they ever get their parents back?

The funniest, zaniest, most out-of-this-world adventure you’ll read all year!

Larry Hayes:
Larry Hayes helps run an investment fund, and is a trustee for a homeless charity. On Fridays he homeschools his two kids, letting them decide what to study. In the future he hopes to become a treasure hunter, invent a yoghurt that makes you happy, and solve the maths behind the human brain. How to Survive Without Grown-Ups is his debut novel.