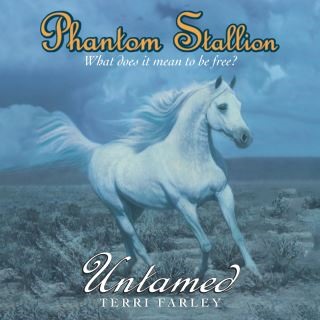 Samantha discovers a plot to wipe out the wild horses near her family's ranch, but she can't convince anyone else that the Phantom's herd needs help.
When her insistence that the mustangs are in danger pits her against her family, her classmates, and the local sheriff, her only friend left is the Phantom Stallion. Can he help her solve the mustang mystery before her dad sends her out of harm’s way, back to San Francisco?

Terri Farley: Terri Farley​ is the best-selling author of books about the contemporary and historic West. Her most recent book ​Wild at Heart: Mustangs and the Young People Fighting to Save Them​ (Houghton Mifflin Harcourt) is a Junior Library Guild selection; winner of the Sterling North Heritage award for Excellence in Children's Literature; and has been honored by Western Writers of America, National Science Teachers Association, and American Association for the Advancement of Science. She is a recent inductee into the Nevada Writers Hall of Fame. Her ​Phantom Stallion​ (HarperCollins) series for young readers has sold over two million copies worldwide.