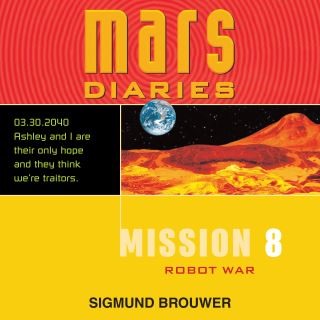 Set in 2040, the Mars Diaries feature 14-year-old Tyce Sanders, the only child ever born on Mars. He lives under a dome on the red planet with 200 scientists and techies, including his mother, Kristy Sanders, a biologist and a believer. Tyce is confined to a wheelchair, but virtual reality and robotics allow him to experience life beyond his physical boundaries. Kids ages 10-14 will love the cool, high-tech gadgets, space travel, and great plot twists in this exciting series.

Sigmund Brouwer: SIGMUND BROUWER grew up in Red Deer, Alberta, Canada, and developed an early interest in sports like hockey, racquetball, and biking. His poor performance in high school English classes led him to receive a degree in commerce from Calvin College in Grand Rapids, Michigan, and not to pursue writing. When a professor in his undergraduate English course encouraged him to write, and he eventually received a degree in journalism from Carleton College in Ottawa. After publishing several articles for U.S. and Canadian magazines, he turned to writing books for kids reluctant to read.
Sigmund is married to Christian recording artist Cindy Morgan; the couple has two daughters. Spends time between family homes in Red Deer and Nashville.