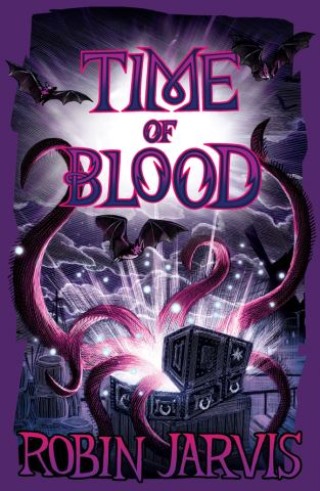 Time of Blood (The Witching Legacy)

Master of supernatural adventure Robin Jarvis continues his enthralling new series that began with The Power of Dark and The Devil's Paintbox.

The sinister Mister Dark is more powerful than ever and has enslaved young Verne to his will. Can Lil save her best friend before their enemy unleashes his most audacious and insane plan yet? Even with the help of new, surprising allies – a witch, a mysterious man of many disguises and the secretive aufwaders beneath the cliff – all seems hopeless.

Whitby has never been a more frightening and dangerous place to live, and the murdered dead refuse to rest in peace.

Robin Jarvis started writing in 1988 and quickly became a bestselling author of children's books with his Deptford Mice and Whitby Witches series. Time of Blood is the third of his chillingly thrilling Witching Legacy series set in the atmospheric North Yorkshire coastal town of Whitby. Perfect for age 11 years and over, although younger readers will also enjoy – if they are brave enough! You can find out more at www.robinjarvis.com or follow him on Twitter @robinjarvis1963

Robin Jarvis started writing and illustrating his own books in 1988 and, with his acclaimed ‘Deptford Mice’ and ‘Whitby Witches’ titles, quickly acquired a reputation as a bestselling children’s author. He has been shortlisted for the Carnegie Prize and Smarties Award, and twice won the Lancashire Libraries Children’s Book of the Year Award. Amongst children, his work has a cult following.