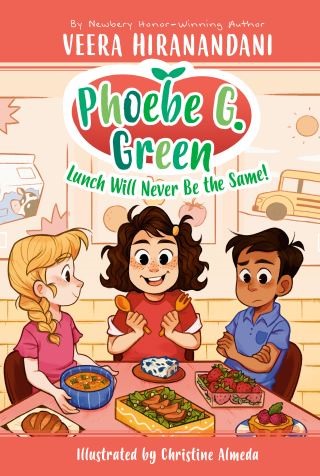 Lunch Will Never Be the Same! #1

"Gently humorous black-and-white illustrations pair nicely with the text. With all the foodies out there, this delightful series deserves a long shelf life…and many more courses."--Kirkus Reviews

"Fans of Junie B. Jones and Judy Moody . . . will enjoy this."--School Library Journal

Phoebe loves her pet fish, Betty #2 (named after Betty #1, may she rest in peace), making lists, and her best friend Sage. But when Camille, a tall French girl, arrives at school with unusual lunches, Phoebe’s friendship with Sage doesn’t seem so important anymore. Thanks to Camille, Phoebe discovers goat cheese, butter lettuce, and cilantro (although she’s convinced that’s not a real word). She’s determined to get invited to her new friend’s house for dinner to see what other mysterious food Camille eats. But what about Sage? Can Phoebe make a new friend and keep an old one?

Veera Hiranandani: Veera Hiranandani has an MFA in Fiction Writing from Sarah Lawrence College, spent six years as a book editor, and is the author of the middle grade novel The Whole Story of Half a Girl as well as the chapter book series, Phoebe G. Green. She is the proud mom of two emerging foodies who even like to eat their vegetables (most of the time). She lives with her husband and children in New York. Visit her at www.veerahiranandani.com and follow her on Twitter @VeeraHira.

Joelle Dreidemy studied art at the Emile Cohl School in Lyon, France. She lives in Paris, France, where she creates illustrations for picture books including The Lamb Who Came for Dinner and Smelly Peter the Great Pea Eater, magazines, and greeting cards for publishers all over the world. Joelle also writes songs, sings, and plays bass guitar in a rock band. www.joelledreidemy.fr