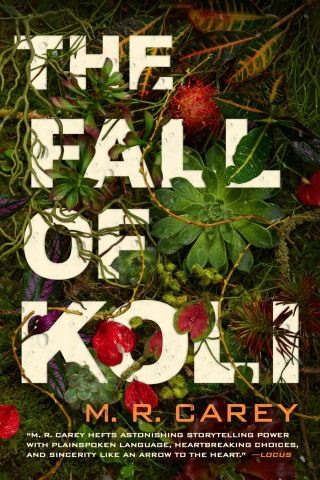 The Fall of Koli

M. R. Carey's Rampart trilogy is "an epic post-apocalyptic fable" (Kirkus) like no other, set in a world where nature has turned against us. Now, in the unforgettable final chapter, the world that was lost comes back to haunt those who have survived–and Koli's journey comes to its astonishing close.

What will the future hold for those who are left?

Koli has come a long way since being exiled from his small village of Mythen Rood. In his search for the fabled tech of the Old Times, he knew he'd be battling shunned men, strange beasts and trees that move as fast as whips. But he has already encountered so much more than he bargained for.

Now that Koli and his companions have found the source of the signal they've been following - the mysterious "Sword of Albion"—there is hope that their perilous journey will finally be worth something.

They're searching for a way to help humanity fight back against nature. But what they'll find is an ancient war that never ended . . .

For more from M. R. Carey, check out:
The Girl With All the Gifts
Fellside
The Boy on the Bridge
Someone Like Me

By the same author, writing as Mike Carey:
The Devil You Know
Vicious Circle
Dead Men's Boots
Thicker Than Water
The Naming of the Beasts

M. R. Carey: M. R. Carey has been making up stories for most of his life. His novel The Girl With All the Gifts was a USA Today bestseller and is a major motion picture based on his BAFTA-nominated screenplay. Under the name Mike Carey he has written for both DC and Marvel, including critically acclaimed runs on X-Men and Fantastic Four, Marvel's flagship superhero titles. His creator-owned books regularly appear in the New York Times bestseller list. He also has several previous novels, two radio plays, and a number of TV and movie screenplays to his credit.