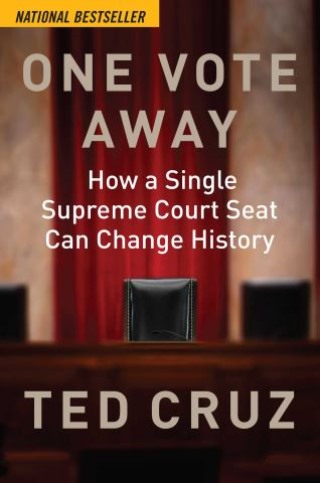 How a Single Supreme Court Seat Can Change History

With Justice Ruth Bader Ginsburg’s sudden passing, control of the Supreme Court—and with it the fate of the Constitution—has become the deciding issue for many voters in the 2020 presidential election. And the stakes could not be higher.

With a simple majority on the Supreme Court, the left will have the power to curtail or even abolish the freedoms that have made our country a beacon to the world. We are one vote away from losing the Republic that the Founders handed down to us. Our most precious constitutional rights hang by a thread.

Senator Ted Cruz has spent his entire career on the front line of the war to protect our constitutional rights. And as a Supreme Court clerk, solicitor general of Texas, and private litigator, he played a key role in some of the most important legal cases of the past two decades.

In One Vote Away, you will discover how often the high court decisions that affect your life have been decided by just one vote. One vote preserves your right to speak freely, to bear arms, and to exercise your faith. One vote will determine whether your children enjoy their full inheritance as American citizens.

God may endow us with “certain unalienable rights,” but whether we enjoy them depends on nine judges—the “priests of the robe” who have the last say in our system of government. Drawing back the curtain of their temple, Senator Cruz reveals the struggles, arguments, and strife that have shaped the fate of those rights. No one who reads One Vote Away can ever again take a single seat on the Supreme Court for granted.

Ted Cruz: Ted Cruz, a U.S. Senator from the State of Texas, has dedicated his life to upholding the principles enshrined in our Constitution. After graduating from Harvard Law School, he clerked for Judge J. Michael Luttig and Chief Justice William Rehnquist and became the youngest and longest-serving solicitor general in Texas history. Senator Cruz and his wife, Heidi, live in his hometown of Houston with their two young daughters, Caroline and Catherine.