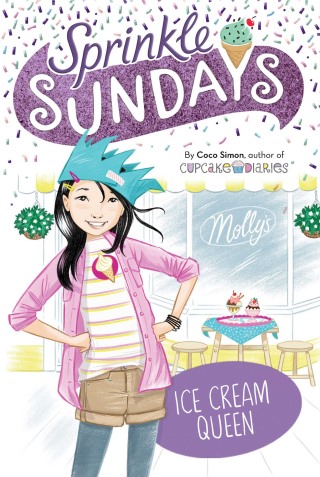 Things might be too good to be true for Tamiko in this eleventh book in the Sprinkle Sundays series from the author of the Cupcake Diaries series and Donut Dreams series!

It’s the start of a new school year, and everything is going perfectly for Tamiko. She has a great back-to-school wardrobe, her BFF Sierra is in her homeroom, and she just won a contest to design the cover for a local magazine! Everything is turning up rainbow sprinkles. But when Tamiko starts walking around with her head in the clouds and not putting in her usual effort at the shop, it’s time for the Sprinkle Sunday squad to bring her back down to Earth!

Coco Simon: From cupcakes to ice cream and donuts! Having written over thirty books about middle school girls and cupcakes and ice cream, Coco Simon decided it was time for a change; so she’s switched her focus to her third favorite sweet treat: donuts! When she’s not daydreaming about yummy snacks, Coco edits children’s books and has written close to one hundred books for children, tweens, and young adults, which is a lot less than the number of cupcakes, ice cream cones, and donuts she’s eaten. She is the author of the Cupcake Diaries, the Sprinkle Sundays, and the Donut Dreams series.