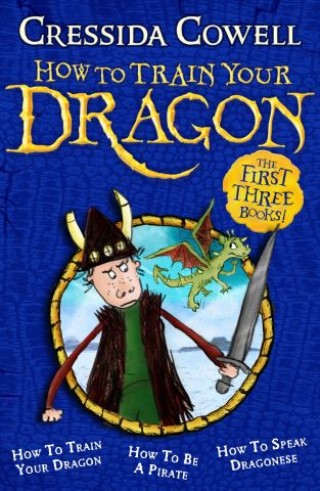 How To Train Your Dragon Collection

Hiccup Horrendous Haddock the Third is a smallish Viking with a longish name. Hiccup's father is chief of the Hairy Hooligan tribe which means Hiccup is the Heir to the Hairy Hooligan throne - but Hiccup feels like a very ordinary boy. Can he be a Hero?

This book bundle contains the first three hilarious stories in Hiccup's adventures with his dragon, Toothless. Will Hiccup lead ten novices in their initiation into the Hairy Hooligan Tribe. Can he steal back his book of Dragonese from the Romans? Can he navigate the Fortress of Sinister, and defeat the Monstrous Strangulator?

Most importantly, can Hiccup really save the Isle of Berk with a dragon who looks like an ickle brown bunny with wings? There's only one way to find out...

Cressida Cowell is currently the Waterstones Children's Laureate (2019 - 2021). She is the author and illustrator of the bestselling The Wizards of Once and How to Train Your Dragon books series, and the author of the Emily Brown picture books, illustrated by Neal Layton.


Cressida is an ambassador for the National Literacy Trust and the Reading Agency, a Trustee of World Book Day and a founder patron of the Children's Media Foundation. She has won numerous prizes, including the Gold Award in the Nestle Children's Book Prize.