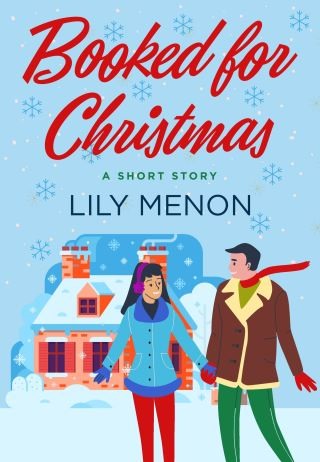 This new novella from Lily Menon, author of Make Up Break Up, is sure to get readers in the holiday spirit.

Novelist Sophia Hart (real name: Sophie Bartholomew-Kaur-Hughes, but try fitting that on a book cover) absolutely hates her loudest critic—Evan Wolfe, evil mastermind behind the Lone Wolfe book review column. They've never met, but Wolfe's favorite pastime seems to be dumping on Sophie's unapologetically happy, magical romances. Sophie, not one to be left behind, gets her revenge in her own ways (never annoy a writer in search of a villain).

When Sophie decides to throw a holiday party at her cabin, Wolfe is the last person on her mind. But the universe has a twisted sense of humor. Not only does Wolfe show up as someone’s plus one, but a massive snowstorm blows in, stranding them both alone together in Sophie’s cabin.

Over the next few days, Sophie begins to realize that Wolfe isn’t as odiously cynical a man as she’d originally thought. In fact, he’s kind of…sweet. And impossibly hot. But still, Sophie’s been hurt before and she has so much to lose. What she needs is one sure sign that she and Wolfe are meant to be together. Will Sophie and Wolfe get their Christmas miracle?

Lily Menon: Lily Menon has always been enamored of romantic comedies and happily-ever-afters in all shapes and sizes. Her very first love story, written at age nine, was about a handsome boy who wooed the heroine with books, chocolates, and a very fat puppy. Now Lily lives with her own handsome boy (who indeed wooed her with books, chocolates, and fat puppies) in the mountains of Colorado, where she spends her days dreaming up kissing scenes and meet-cutes. Visit her on the web at www.lilymenon.com.