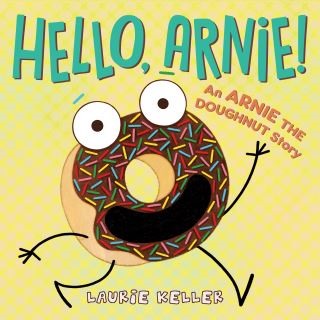 An Arnie the Doughnut Story

Arnie the Donut wants to know what kind of giant donut YOU are in Hello, Arnie!, a picture book for preschoolers by bestselling, Geisel Award-winning creator Laurie Keller.

Arnie is excited to say hello to all his pastry friends in the bakery. There are all the usual confection suspects: Chocolate, Glazed, French Twist, Long John, and Crueller. But there is one pastry that he’s never met before. This pastry looks nothing like the others. Hmmm. Who could it be? Spoiler alert—it’s the Reader!

This charming picture book introduces children to everyone’s favorite doughnut through a series of questions that the youngest reader will love taking part in.

Laurie Keller is the bestselling author-illustrator of many books for kids, including Do Unto Otters; Potato Pants!; The Scrambled States of America; the Geisel Award-winning We Are Growing!; and Arnie the Doughnut, as well as three books in the Adventures of Arnie the Doughnut chapter book series.

Growing up in Michigan, Laurie always loved to draw, paint and write stories. She earned a B.F.A. at Kendall College of Art and Design, then worked at Hallmark Cards in Kansas City as a greeting card illustrator for seven years. One night, the idea for a children’s book popped into her head and after showing the story to several publishers in New York City, she quit her job and moved there. The following year, that story idea was a published book—The Scrambled States of America. Laurie loved living in NYC, but she returned to her home state, where she lives in the woods along the shores of Lake Michigan.