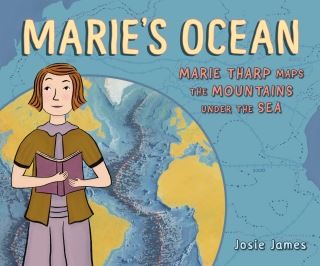 Marie Tharp Maps the Mountains Under the Sea

A mixed-format picture book biography of Marie Tharp, the remarkable woman who mapped the ocean floor.

Marie Tharp earned a graduate degree in geology in the 1940s, at a time when scientific careers were largely unavailable to women. Marie’s vision and tenacity paved the way for her to become one of the greatest oceanographic cartographers of the 20th century. She was the first person to map the ocean floor and discover the 40,000 mile long Mid-Ocean Ridge and Rift Valley. Her astounding discovery supported the theory of continental drift, which led to the theory of plate tectonics. But it was not an easy road, and Marie struggled to receive the credit she deserved for her discovery.

From Marie Tharp’s early childhood dreams all the way to her defining achievement, Josie James's Marie's Ocean is the story of one of earth science’s greatest hidden figures.