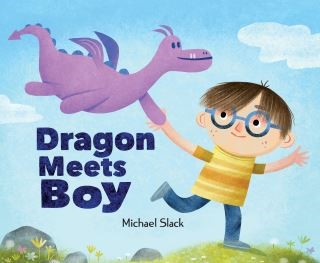 Michael Slack's Dragon Meets Boy is a moving friendship story about the universal joys and tender heartaches of growing up, for fans of Toy Story.

One summer day a boy meets a dragon. They become instant friends and share incredible adventures together. When Boy is sad, Dragon cheers him up. When Boy is scared, Dragon makes him feel brave. But, in time, things start to change. Boy gets bigger, while Dragon stays the same. Dragon seems so lonely, until the circle continues with a new generation with Boy’s daughter!

This deftly poignant story captures the lifelong friendship between a child and a beloved toy.