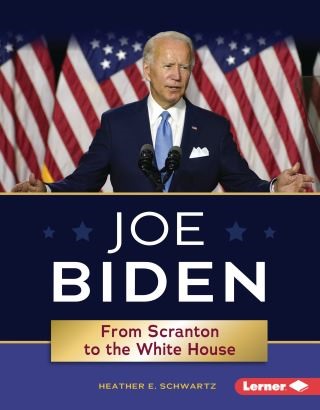 From Scranton to the White House

A Timely Biography of the 46th President

Former Vice President Joe Biden played an essential role in the Obama administration. As the 47th vice president of the United States, he helped revive the economy, reduce gun violence, and protect women’s rights. Biden announced his campaign for president in 2019. Originally dismissed, he pulled off a game-changing nomination in South Carolina and went on to become the president-elect.

In 1972 Biden was elected to represent his home state of Delaware in the US Senate. But tragedy hit before his inauguration. His wife, two sons, and daughter were in a car accident. Biden lost both his wife and daughter, and was sworn into office from the hospital where his sons were recovering. Keeping his promise to govern, he became Delaware’s longest-serving senator. Discover Biden’s perseverance, career, and his race back to the White House.

Heather E. Schwartz: When Heather E. Schwartz was thirteen years old, she tracked down several lead orphans from the 1983 movie "Annie" and interviewed them by phone. As an adult, she realized she could apply those same early instincts to a career as a journalist and writer. She is the author of more than 35 nonfiction children's titles, published by Lerner Publishing Group, Capstone Press, Teacher Created Materials, Lucent Books, and Tangerine Press, a Scholastic imprint. She has written articles for National Geographic Kids and Discovery Girls. In addition, she developed the content for KidsGetArthritisToo.org, the juvenile section of the Arthritis Foundation's website. Other credits in the children's market include articles for Teen, Girls' Life, and All About You magazines. Additionally, Ms. Schwartz is a former editor at Bridal Guide magazine, co-author of Bridal Guide Magazine's How to Choose the Perfect Wedding Gown (Warner, 2004), and contributor to The Takeout Cookbook (Knock Knock 2007).