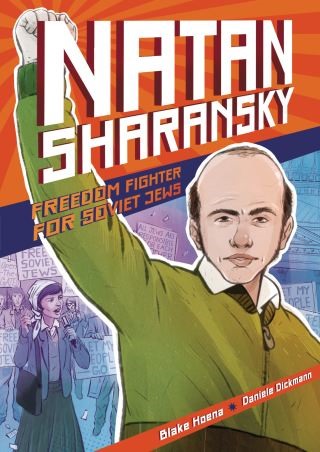 This graphic novel biography is the story of Soviet Jewry “refusenik” and human rights activist Anatoly “Natan” Sharansky. Born in 1948 to a Jewish family in Ukraine, at that time part of the Soviet Union, he was arrested as a young man and later imprisoned for wanting to leave the Soviet Union and go to Israel. His struggle became the struggle of all Soviet Jews who wished to leave. With the help of his wife, many Jewish activists, and world leaders, he eventually succeeded in immigrating to Israel, paving the way for the release of other Soviet Jews who wished to live in freedom.

Blake Hoena: Blake Hoena has written more than one hundred books for children, including an original graphic novel series, Eek & Ack, and graphic novel retellings of The Legend of Sleepy Hollow and Peter Pan. Blake lives in Saint Paul, Minnesota, with his wife, two dogs, two cats, and hundreds of comics.