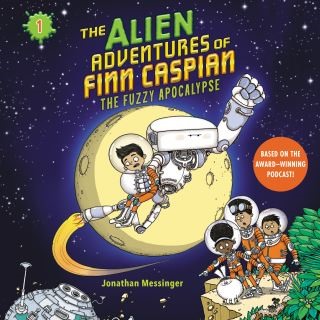 The Alien Adventures of Finn Caspian #1: The Fuzzy Apocalypse

Explorer Troop 301 tries to save an exploding planet from a fluffy bunny and a devious alien in the first book of this chapter book series based on the award-winning kids’ podcast!

Eight-year-old Finn lives is the first kid born in space and he spends his days looking for a new planet to call him with his three best friends and his robot, Foggy.

He’s used to wild, galaxy hopping adventures. But when Explorer Troop 301 gets stuck on a planet that’s about to explode, Finn and his friends will have to face giant aliens, a leader with mind control powers, and one evil, fluffy bunny rabbit in order to save the planet . . . and themselves.

Blast off into a brand-new adventure inspired by the popular award-winning kids’ podcast, now in its eighth season!

Jonathan Messinger makes podcasts and books in Chicago, where he lives with his wife and two sons.