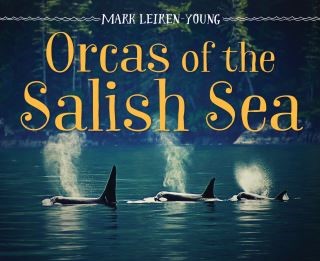 Orcas of the Salish Sea

Meet Onyx and the orcas of J pod, the world’s most famous whales. Illustrated with stunning photos, this picture book introduces young readers to the orcas humans first fell in love with. The members of J pod live in the Salish Sea, off the coast of Washington and British Columbia. Moby Doll was the first orca ever displayed in captivity, Granny was the oldest orca known to humanity, and Scarlet was the orca humans fought to save.

Mark Leiren-Young: Mark Leiren-Young is a writer, documentary filmmaker, podcaster and orca activist. His book The Killer Whale Who Changed the World won the Science Writers and Communicators of Canada general audience book award. He wrote, directed and produced an award-winning documentary called The Hundred-Year-Old Whale, and his documentary about Moby Doll is being produced by Middle Child Films. Mark hosts a podcast about orca and ocean stories and is actively involved in the fight for the survival of the endangered southern residents. Mark has written for other young audiences for ABC, PBS, YTV, Treehouse and BBC Kids. He lives in Victoria, British Columbia.