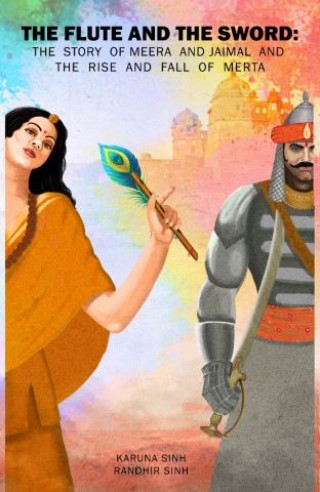 The Flute and the Sword

The book, though fiction, follows an authentic timeline as it tells the story of the two remarkable grandchildren of Rao Duda, Meera, and Jaimal. Meera was a gifted child, recognized for her intellectual brilliance and piety from her childhood. Her devotion to Lord Krishna was intense and never changed, even though she was married to Bhojraj, the son of Maharana Sanga. The book traces her life until she reaches Dwarka and is finally absorbed by her lord. Jaimal, on the other hand, remained constantly at war, struggling to preserve his kingdom against powerful forces ranged against it. The constant struggle against Marwar finally leads to the destruction of Merta with the curtain coming down with Jaimal indomitably leading the defense of Chittor against Akbar. Teeming with characters well known in history, the book offers a slice of it in painful though valorous detail. Despite their tragedy, the Mertias are a force to reckon with but as the Authors put it, in the 16th Century they created their own Camelot which rose and fell within three generations.

Karuna Sinh: Karuna Sinh. A highly qualified individual with an MA in English. She is from Rajasthan and is well acquainted and related to the descendants of some of the personalities figuring in this book. She has done the research and is knowledgeable on the period as well as on the personality and songs of Meera.|||Randhir Sinh. He has a biography of Lieutenant General Sagat Singh to his credit, which was a bestseller on Amazon. He retired after 37 years’ service in the Army and has studied military history in detail. His knowledge of history and of the period has enabled him to take suitable advantage of the research and work on the novel.