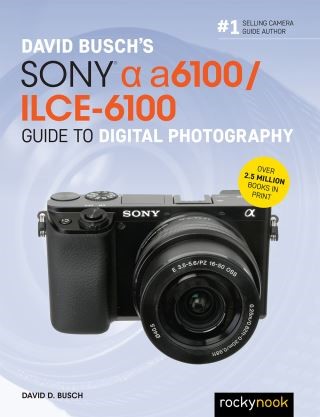 David Busch’s Sony Alpha a6100/ILCE-6100 Guide to Digital Photography is your essential handbook for learning all the powerful – but easy to use -- features of Sony's most advanced entry-level APS-C mirrorless camera. Its new LCD swivels to face forward, making the camera excellent for self-portraits, vlogging, and other applications. The a6100 features a 24 megapixel sensor with 425 embedded phase-detect pixels for lightning-fast autofocus at up to 11 frames per second. With an electronic shutter that provides a silent shooting option, stunning 4K/UHD video capabilities, and new time-lapse photography features, the a6100/ILCE-6100 is a versatile digital camera that has simple operation yet boasts all the features you need to take great photos. With this book in hand, you will discover all the capabilities of the Sony Alpha a6100/ILCE-6100 as you explore the world of digital photography, develop your creativity, and capture the best photographs you’ve ever taken.

Filled with detailed how-to steps and full-color illustrations, David Busch’s Sony Alpha a6100/ILCE-6100 Guide to Digital Photography describes every feature of this sophisticated camera in depth, from taking your first photos through advanced details of setup, exposure, lens selection, lighting, and more. It relates each feature to specific photographic techniques and situations. Also included is the handy camera “roadmap,” an easy-to-use visual guide to the a6100/ILCE-6100’s features and controls. Learn when to use every option and, more importantly, when not to use them, by following the author’s recommended settings for every menu entry. With best-selling photographer and mentor David Busch as your guide, you’ll quickly have full creative mastery of your camera’s capabilities, whether you’re shooting on the job, taking pictures as an advanced enthusiast pushing the limits of your imagination, or are just out for fun. Start building your knowledge and confidence, while bringing your vision to light with the Sony Alpha a6100/ILCE-6100.