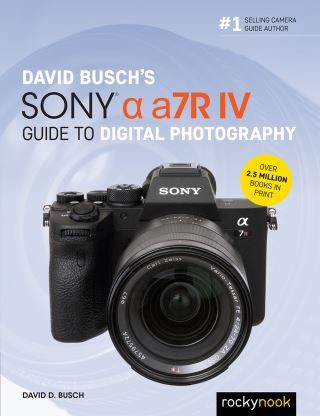 David Busch's Sony Alpha a7R IV Guide to Digital Photography is the most comprehensive resource and reference for Sony’s innovative 61-megapixel full frame mirrorless camera. Capable of 10 frame-per-second bursts even at full resolution, the a7R IV is fast enough for action photography, and its 15-stop enhanced dynamic range delivers the image quality that the most demanding landscape or fine-art photographer requires. This camera’s remarkable low-light performance, fast sensor-based 567-point phase detect autofocus (with real-time face and eye tracking in both still and movie modes), and improved 5-axis in-body image stabilization, the a7R IV has all the tools needed to take incredible images. This book will show you how to master those features as you explore the world of digital photography and hone your creativity with your a7R IV.

Filled with detailed how-to steps and full-color illustrations, David Busch's Sony Alpha a7R IV Guide to Digital Photography covers every feature of this camera in depth, from taking your first photos through advanced details of setup, exposure, lens selection, lighting, and more, and relates each feature to specific photographic techniques and situations. Also included is the handy camera "roadmap" chapter, an easy-to-use visual guide to the camera's features and controls. Learn when to use every option and, more importantly, when not to use them, by following the author’s recommended settings for each menu entry. With best-selling photographer and mentor David Busch as your guide, you'll quickly have full creative mastery of your camera’s capabilities, whether you're shooting on the job, as an advanced enthusiast exploring full frame photography for the first time, or are just out for fun. Start building your knowledge and confidence, while bringing your vision to light with the Sony a7R IV.