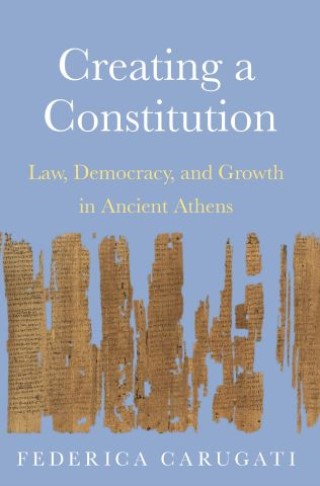 We live in an era of constitution-making. More than half of the world's constitutions have been drafted in the past half-century. Yet, one question still eludes theorists and practitioners alike: how do stable, growth-enhancing constitutional structures emerge and endure? In Creating a Constitution, Federica Carugati argues that ancient Athens offers a unique laboratory for exploring this question. Because the city-state was reasonably well-documented, smaller than most modern nations, and simpler in its institutional makeup, the case of Athens reveals key factors of successful constitution-making that are hard to flesh out in more complex settings.

Carugati demonstrates that the institutional changes Athens undertook in the late fifth century BCE, after a period of war and internal strife, amounted to a de facto constitution. The constitution restored stability and allowed the democracy to flourish anew. The analysis of Athens's case reveals the importance of three factors for creating a successful constitution: first, a consensus on a set of shared values capable of commanding long-term support; second, a self-enforcing institutional structure that reflects those values; and, third, regulatory mechanisms for policymaking that enable tradeoffs of inclusion to foster growth without jeopardizing stability.

Uniquely combining institutional analysis, political economy, and history, Creating a Constitution is a compelling account of how political and economic goals that we normally associate with Western developed countries were once achieved through different institutional arrangements.