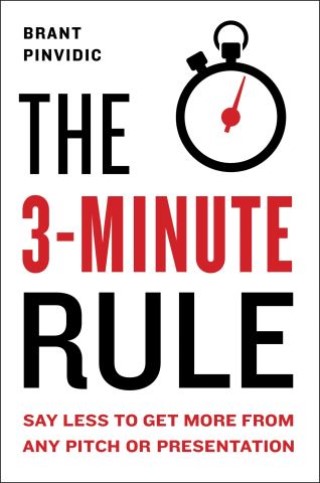 Say Less to Get More from Any Pitch or Presentation

Want to deliver a pitch or presentation that grabs your audience’s ever-shrinking attention span? Ditch the colorful slides and catchy language. And follow one simple rule: Convey only what needs to be said, clearly and concisely, in three minutes or less.

Hollywood producer and pitch master Brant Pinvidic has sold more than three hundred TV shows and movies, run a TV network, and helmed one of the largest production companies in the world with smash hits like The Biggest Loser and Bar Rescue. In his nearly twenty years of experience, he’s developed a simple, straightforward system that’shelped hundreds—from Fortune 100 CEOs to PTA presidents—use top-level Hollywood storytelling techniques to simplify their messages and say less to get more.

Pinvidic proves that anyone can deliver a great pitch, for any idea, in any situation, so your audience not only remembers your message but can pass it on to their friends and colleagues. You’ll see how his methods work in a wide range of situations—from presenting investment opportunities in a biotech startup to pitching sponsorship deals for major sports stadiums, and more.

Now it’s your turn. The 3-Minute Rule will equip you with an easy, foolproof method to boil down any idea to its essential elements and structure it for maximum impact.

Brant Pinvidic: Brant Pinvidic is an award-winning film director, veteran television producer, C-level sales and presentation coach, host of the top-rated podcast "Why I'm Not...", and a columnist for Forbes. He has been named to the Hollywood Reporter's 30 Most Powerful Reality TV Sellers and is widely recognized as one of the great creative sales leaders in Hollywood. Pinvidic grew up in Canada as a serial entrepreneur before moving to the entertainment industry. His endless energy, quest for adventure, and the 3-Minute Rule have helped make him one of the most sought after C-level consultants in the USA and abroad. He lives in Southern California with his wife and three children.