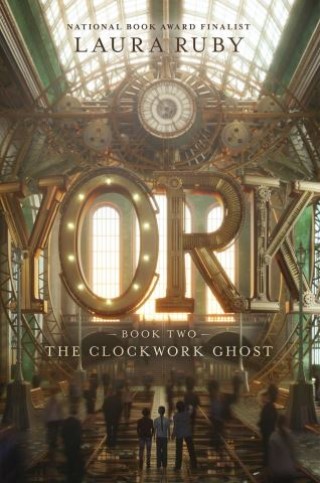 National Book Award finalist Laura Ruby returns with the middle chapter in her epic alternate-history adventure—a journey that will test Tess, Theo, and Jaime and change their lives forever.

It was only a few weeks ago that the Biedermann twins, Tess and Theo, along with their friend Jaime Cruz, followed the secrets of the Morningstarrs’ cipher further than anyone had in its century-and a-half history—and destroyed their beloved home in the process.

But the Old York Cipher still isn’t solved. The demolition of 354 W. 73rd Street only revealed the next clue in the greatest mystery of the modern world, and if Tess, Theo, and Jaime want to discover what lies at the end of the puzzle laid into the buildings of New York by its brilliant, enigmatic architects, they will need to press on.

But doing so could prove even more dangerous than they know. It is clear that the Morningstarr twins marshaled all the strange technology they had spent their lives creating in the construction of the Cipher, and that technology has its own plans for those who pursue it.

It's also clear that Tess, Theo, and Jaime are not the only ones on the trail of the treasure. As enemies both known and unknown close in on them from all sides and the very foundations of the city seem to crumble around them, they will have to ask themselves how far they will go to change the unchangeable—and whether the price of knowing the secrets of the Morningstarrs is one they are willing to pay.

Laura Ruby is the author of books for adults, teens, and children, including Thirteen Doorways, Wolves Behind Them All and the Michael L. Printz Medal winner Bone Gap, both National Book Award finalists; the Edgar Award nominee Lily’s Ghosts; and the Book Sense Pick Good Girls as well as the first two books in the York Saga. She is on the faculty of Hamline University’s MFA in writing for children and young adults program and lives in the Chicago area. You can visit her online at www.lauraruby.com.