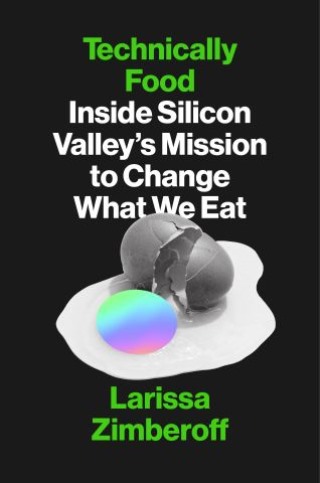 Inside Silicon Valley's Mission to Change What We Eat

“In a feat of razor-sharp journalism, Zimberoff asks all the right questions about Silicon Valley’s hunger for a tech-driven food system. If you, like me, suspect they’re selling the sizzle more than the steak, read Technically Food for the real story.” —Dan Barber, the chef and co-owner of Blue Hill and Blue Hill at Stone Barns

Eating a veggie burger used to mean consuming a mushy, flavorless patty that you would never confuse with a beef burger. But now products from companies like Beyond Meat, Impossible Foods, Eat Just, and others that were once fringe players in the food space are dominating the media, menus in restaurants, and the refrigerated sections of our grocery stores. With the help of scientists working in futuristic labs––making milk without cows and eggs without chickens––start-ups are creating wholly new food categories. Real food is being replaced by high-tech.

Technically Food: Inside Silicon Valley’s Mission to Change What We Eat by investigative reporter Larissa Zimberoï¬€ is the first comprehensive survey of the food companies at the forefront of this booming business. Zimberoff pokes holes in the mania behind today’s changing food landscape to uncover the origins of these mysterious foods and demystify them. These sometimes ultraprocessed and secretly produced foods are cheered by consumers and investors because many are plant-based—often vegan—and help address societal issues like climate change, animal rights, and our planet’s dwindling natural resources. But are these products good for our personal health?

As our food system leaps ahead to a sterilized lab of the future, we think we know more about our food than we ever did. But because so much is happening so rapidly, we actually know less about the food we are eating. Until now.

Larissa Zimberoff:
Larissa Zimberoff is a freelance journalist who covers the intersection of food, technology, and business. Her work has appeared in the New York Times, the Wall Street Journal, Bloomberg Businessweek, and many others. Zimberoff often presents on, moderates, and leads panels on food tech including at Stanford, reThink Food at CIA/Napa, and IACP. She splits her time between San Francisco, California, and New York City.